skip to main | skip to sidebar

This place was born out of anger, bitterness and not a little madness. I've moved on since then. Plus, the design sucks bears. I know I could probably pimp it up a little - and maybe even make the pictures fit on the damn page - but I fancy a clean break.

This is probably raising expectations of the new place; don't go there with bated breath or anything. It's just a remix of some of the pictures which I've humbly chosen to call "Greatest Hits". There should be more stuff to follow, though, as I hope to make a bit more of a go of this blogging thing.

Anyway, tips and criticisms of the new place are welcome, as long as they're along the lines of "I don't know of any earthly way you could make it better."

Thanks to everyone who's ever left a kind word - or any kind of word, really - on these pages. You've helped me enormously through some tough times. I'd like to buy you all some cake. Then ply you with drugs and give you head. My cold sore's cleared up, in case you were worried.

Oh, and don't forget to update any bookmarks, blog feeds, or any other technological doodahs you use to stalk me, you filthy bastards, as I don't want to be left out here with my cock dangling and no one to see it.
Posted by Not Keith at 19:04 No comments:

Beauty and the Burberry

Hello you! I'm back!

I cannot stress enough just how brilliant a decision it was to go to the Lake District last week. I have trench foot. I reckon that would be much harder to get somewhere sunny. Maybe not. I don't know.

I do know that I didn't manage to get any landscape drawing done. Prior to going, I rather whimsically envisaged myself sat beside a lake, sipping red wine and sketching hosts of golden daffodils. I know they're not in season, but you get the idea. The only time we managed to get out anywhere was for a rather miserable trudge round Windermere. The rest of the time was spent at what was basically an upmarket Butlins with trees.

It didn't strike me as Tilly's sort of place, and it certainly wasn't mine, but she got some sort of deal due to some sort of friend due to some sort of mutual backscratching exercise. Anyway, the place was like a fascist's vision of utopia, with great emphasis placed on physical jerks and bike riding. The car park was full of four-by-fours, and the clientele seemed to consist of professional types who had - to their eternal regret - saddled themselves with children. Typical sight: mid-forties man lagging slightly behind his younger, very pretty wife and their adorable pre-school age daughter, talking work stuff into his mobile.

I am officially in love. I know this because the words uppermost in my mind all week have been, "I told you it would fucking piss down all fucking week, you fucking arse", and I managed not to say them. 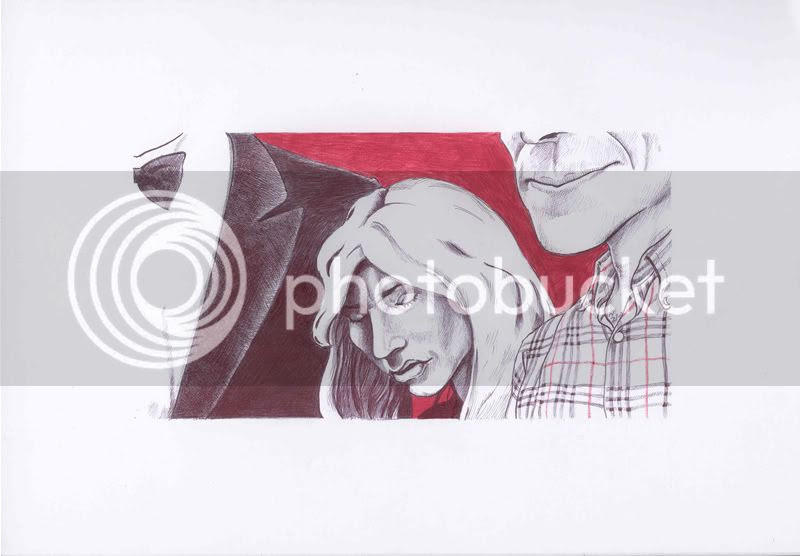 Don't say it. I know. The fucking hands have got fucking jaundice.

In my defence (I seem to say that a lot), I was rushing a bit, since Tilly and I are off up the Lakes for a few days. Personally, I can't see why we don't fuck off somewhere warm for a week, but that's me being selfish, apparently.

Whatever. If we survive the thousand-hour drive up there without killing each other, there's the remote possibility that we might enjoy ourselves. We could maybe do a Withnail and I-inspired visit to Penrith. At least we're not camping, because that would be truly shit.

Anyway, no pics for a while. I'm hoping to get a bit of drawing done while we're there, so I should have something to post when we get back.

Wish us luck. We may need it. 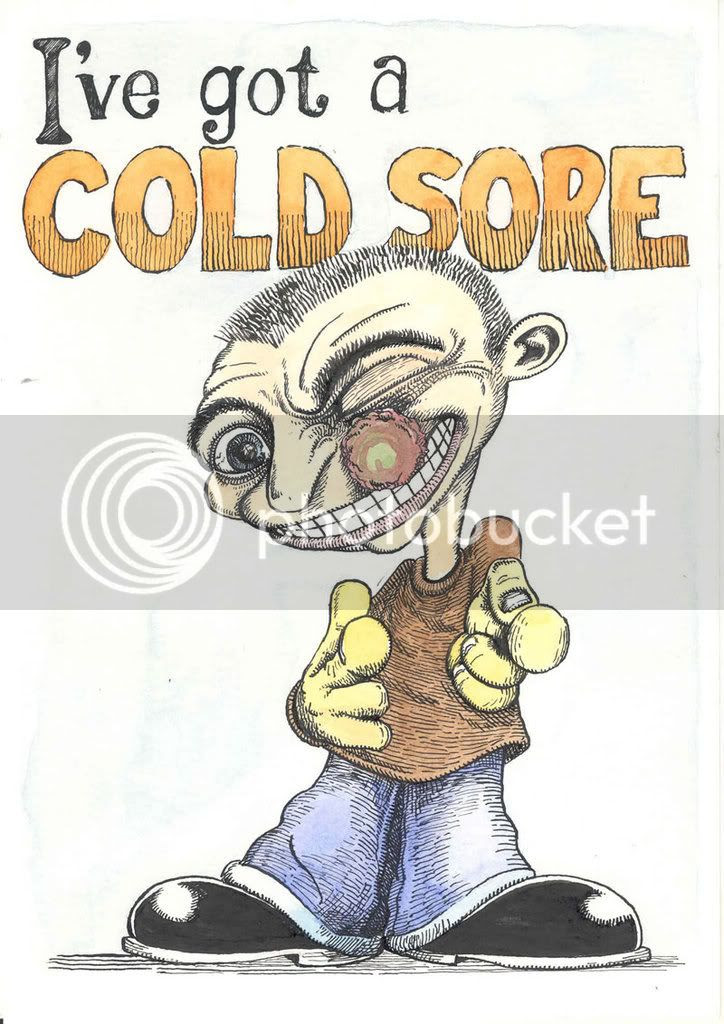 This week I have been trying to be Robert Crumb, after someone (Selena) mentioned him in the comments.

Tilly has a mullet
Tilly has just had her hair done. I could buy a second-hand car for the same money. It looks a bit like a mullet. Tilly is less than grateful for my helpful observation. 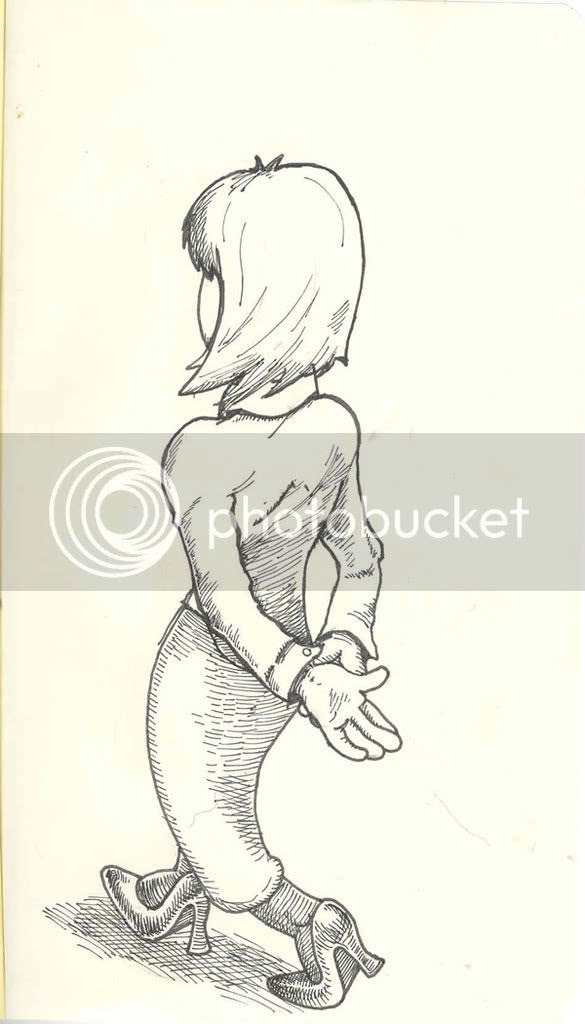 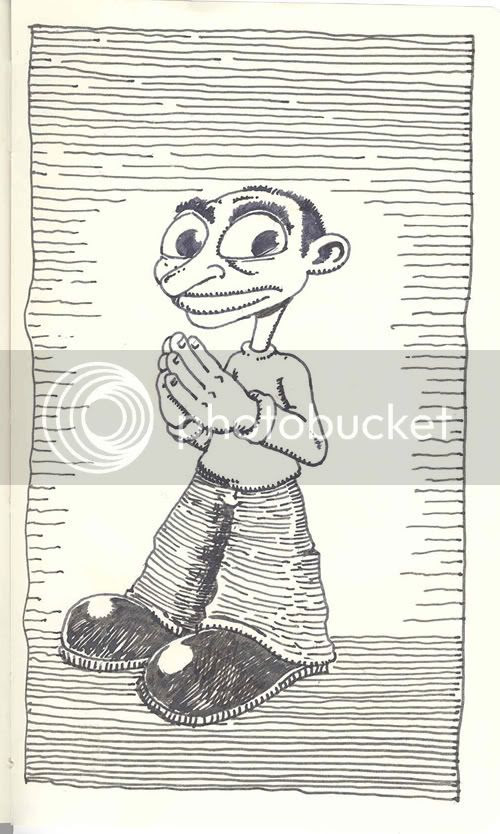 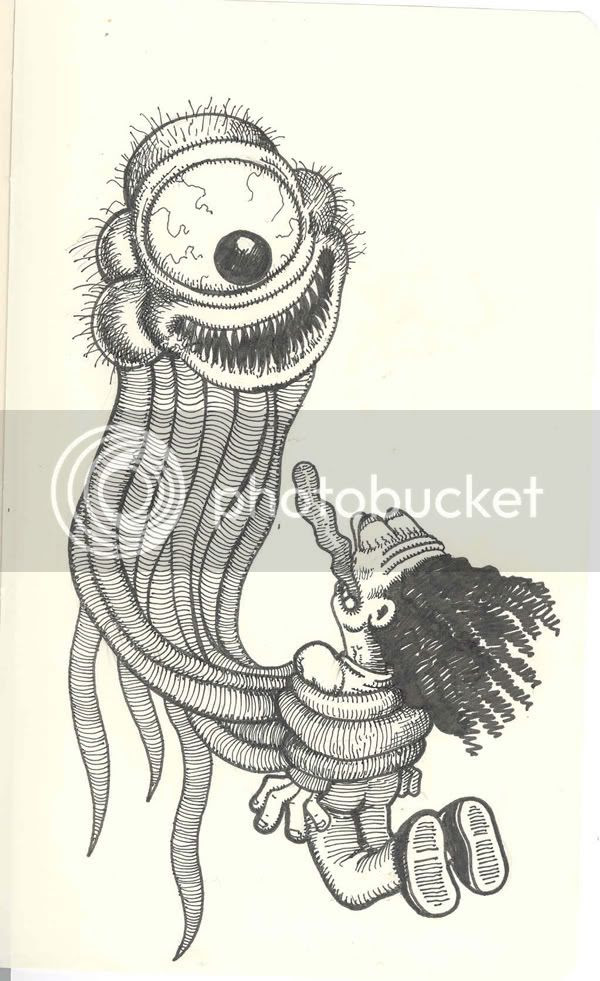 Tilly and me
Looking almost entirely unlike either of us, but very loosely based on a picture taken at The Worst Barbecue Ever. Tilly doesn't dress like a hooker, either. Outdoors, anyway. 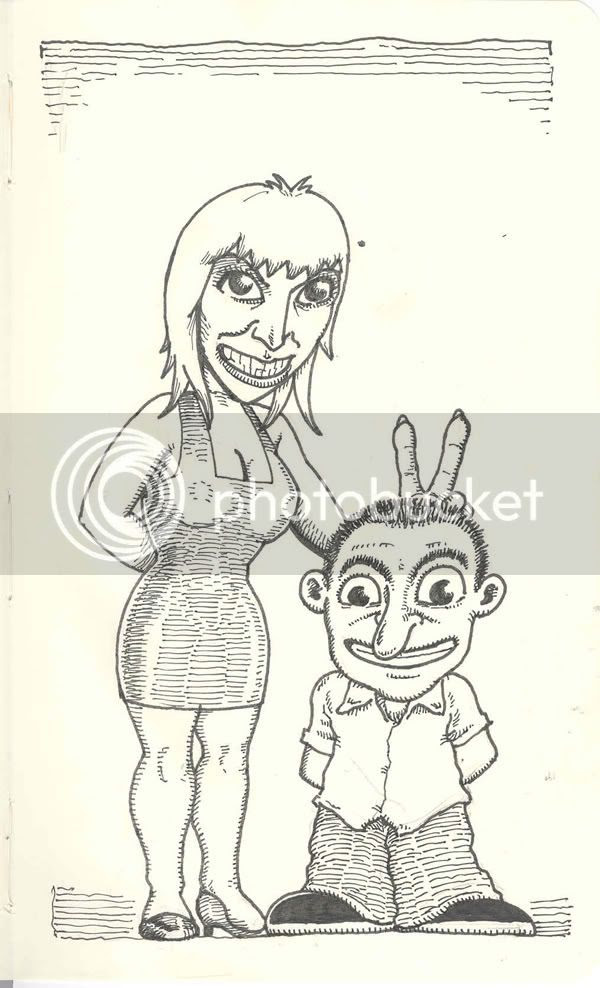 Remember a while back when I told you someone wanted to publish some drawings I'd done? In Grasslimb, the international journal of art and literature? You don't? Then I have nothing to say to you. Be off with you! I've no time for fair weather friends. But if you do, they've now got me listed on their site as appearing in their forthcoming issue. There I am, NotKeith, among all the other normal names of people who don't use ludicrous pseudonyms. Makes me sound a little mysterious, like in the A Team titles when Mr T's name came up. It's not even a proper name! You must exist on a slightly more rarefied celebrity plane than the your fellow actors! Once again, I am exactly like a child on Christmas Eve, just before he wets himself and the shame and self-loathing cast a shadow over the holiday season for ever more.

And now, like the cheap whore I am, I must exhort you all to point your browser to Grasslimb's site and order, or pre-order, the magazine. I don't even know if you can pre-order. I just want you to go there and look at my name! Go look!
Posted by Not Keith at 20:43 9 comments:

Some sketches and a bit of a doodle. I'm using my little Moleskine since I'm away from home a lot these days (and will now be away even more) and haven't got much drawing stuff with me. I should actually be thanking Stan rather than cursing him - the fuck - plus he's lost some really precious stuff and I've lost nothing much at all. And gained an interesting new smell. I feel like a bit of a heel leaving him alone in the stench, but by choosing to view the entire debacle as a modern morality fable about the ecological time-bomb our carrier-bag culture is creating, I can kind of nod and sigh in a slightly superior way.

Five-minute hand sketch, and a picture that looks almost, but not entirely, unlike Tilly. She's lying on the sofa. I say lying when what I really mean is a little-understood variant of the standard lie whereupon the reclining subject does not remain in the same position for more than eight seconds. For fuck's sake.

We had a bit of a row after that.

Then there's a proper portrait of Stan, who for the next few weeks will not be able to leave the house for fear of people asking him for his autograph in the street.

I've had some thoughts about this here blog. It was born under some particularly unpleasant circumstances, and I've kind of moved on a bit from where I was back then. It's got a bit melodramatic, quite frankly, and I fancy a bit of a change. More words maybe, since some of those lovely souls who take time to comment (and I'm looking mostly at you Selena), are encouraging me to post more, and maybe a few more of the pics that wouldn't normally make the cut. A slightly higher turd-to-triumph ratio. 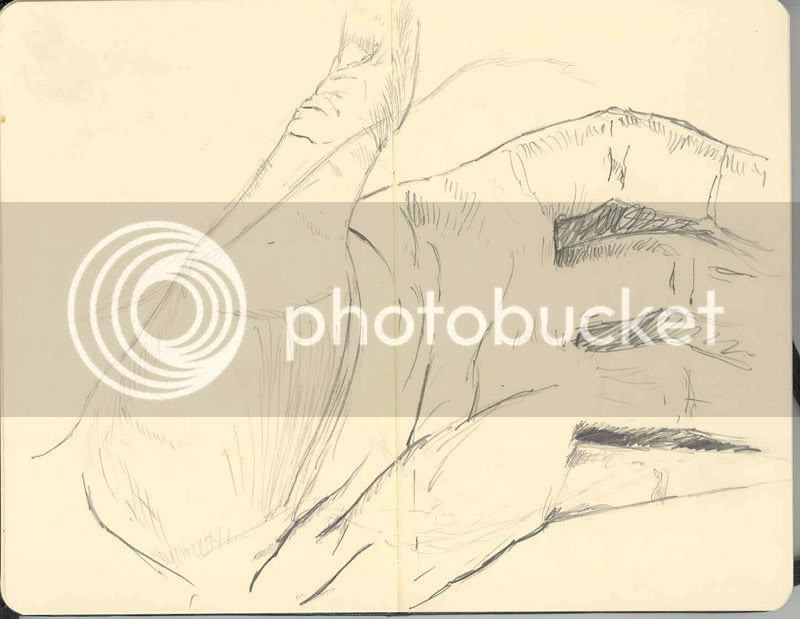 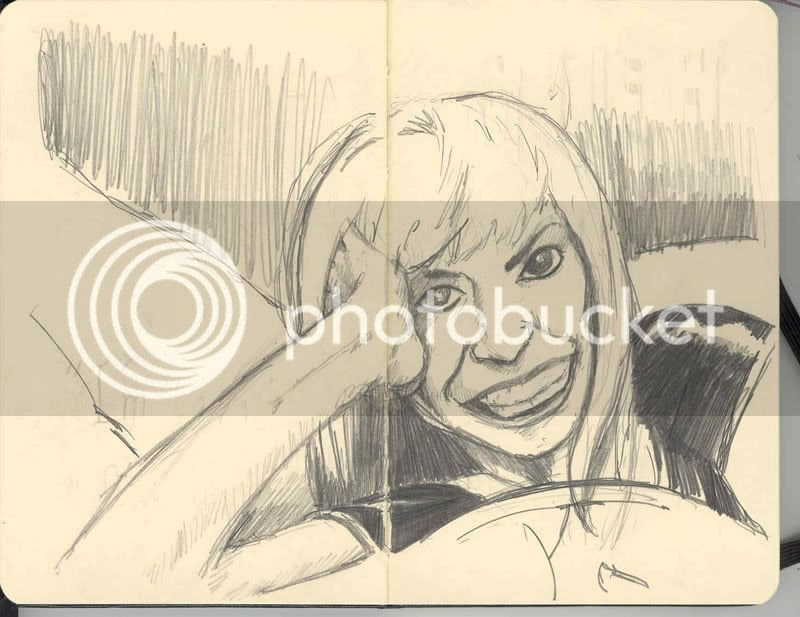 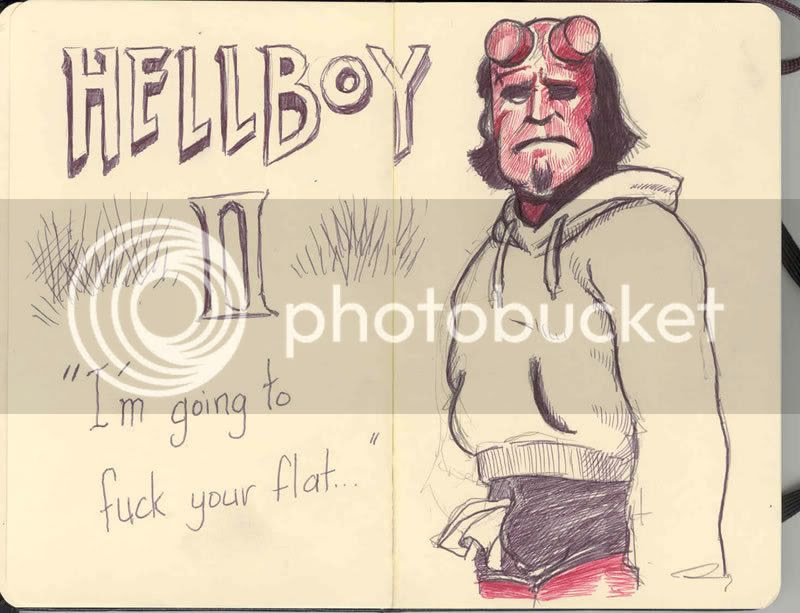 Not Keith
I'm a frustrated artist with mild MS and an inoperable congenital cerebral aneurysm in my right frontal parietal, and believe you me, IT FUCKING SUCKS! So I'm drawing as much as I can when I can so that when I die, i don't feel like an arse for not trying hard enough.

Lucien Freud
The other master. One of two masters.

John Casey
This guy makes ‘little exorcisms’ and I want to be like him.

Viz Comic
It used to be funny.

Gerald Scarfe
One of the most powerful image-makers in history. IMMHO.

Peter Howson
Not a great website but a fantastic artist

James Jean
And this guy. I would do anything to be able to do what this guy can do.

Nicholas Gurewitch
Comics for every occasion.

Danny Gregory
This guy almost inspired me to start drawing again a while ago. But another man’s paralysed wife turned out not to be enough. You’ve got to find your own catastrophe .

Hope Gangloff
What can be done with a couple of biros.

Hieronymus Bosch
I still find it hard to believe that Bosch was painting so long ago.

HR Giger
I discovered Giger on acid at art college. That's how cool I am.

Stan Stan the Ugly Man
That's it. I don't have any more mates who blog. And no that does not mean I've got no mates. I've got heaps of mates. Fuck you. Mate.